Malcolm Goldie is a musician, producer and sound designer, creating original music and sound for advertising, branding, art and fashion.

His work often combines a conceptual approach with a lightness of touch and a subtle humour, it has been described as both ‘psychedelic electro-pop’ and ‘R2D2 meets Brian Eno’. Occasionally his music is darker and a little strange.

After graduating with an MA from the Royal College of Art, he expanded his passion for music and digital sound manipulation into a career as an independent musician. Malcolm now works as a producer and sound designer of electronic music based from his studio in South West London.

‘The Sound of Malcolm’, his first full length album, was recently released on vinyl by Trunk Records. 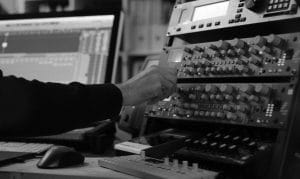 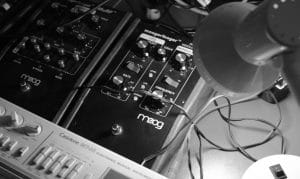 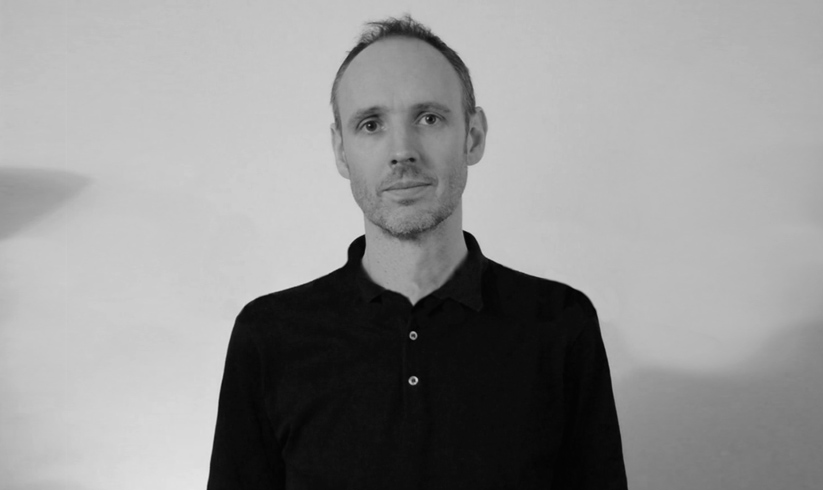 How did you get started in sound?

As a kid I made comedy cassette tapes – farts, comedy sketches, recordings of lemonade bottles opening, fake explosions and any odd sound I could make. In my teenage years I discovered electro and hip hop and started making music with drum machines, scratching records, synths, etc. Now I have a good grasp of what my ‘voice’ is – my working process – which I think of as similar to playing with paper, paint and glue but in the mysterious world of sound.

What instruments do you play and use?

Guitar, bass, turntables, drum machines, samplers, analog synths, effects units, and of course various music software. I can also do quite a range of comedy voices, including a half decent Scottish accent.

Can you describe your working process?

I start with an idea, whether that is from a client’s brief or my own intention, and throw sounds around in the same way a child might build a ‘spaceship’ from a box full of scrap cardboard, egg boxes and string. I quickly push things in and out of the composition seeing what works, what doesn’t. I like to surprise myself and when it starts to make me smile I know I’m on the right track.

Name three records which played an important part in your life?

Malcolm McLaren and the World’s Famous Supreme team – Would Ya Like More Scratchin (1984)
It’s basically the Art of Noise meets World’s Famous Supreme Team and is probably the most underrated genius record in hip hop. It has the greatest scratch sound of all time on side 2. In the tradition of all great records, it’s a one off.

M:I:5 – Maßstab 1:5 (1997)
This was released on Profan – my all time favourite techno record label, from Cologne, Germany. Minimal but warm, weird but funky, it loops on forever without doing much but it seems to have a sense of humour. There’s not much like it.

The Shaggs – Philosophy of the World (1969)
After a long and fruitless search for music that was music made by people with more hope than ability who can barely play … I finally came across this album. It sounds like three people in a room each playing their own song, it sends most people running away with their hands over their ears. Frank Zappa loves it. It literally changed my musical world.

What is your favourite sound?

I love the sound of cicadas – it means I am on holiday somewhere very warm. Also I pretty much like any song played at either half or double its normal speed.

What is your least favourite sound?

I don’t like the kind of echo you get in minimal rooms with hard floors, no curtains and nothing on the walls – it’s a kind of empty sound that discourages loud laughter. Ironically I love a particular Lexicon Reverb preset called ‘Tiled Room’ which synthetically simulates exactly the kind of room sound I can’t stand in real life.

Are you usually composing after the video is made or before?

Most of the time it’s a side by side process and I can have a dialogue with the designer to suggest enhancement to the sync between sound and visuals. On the work I made for Canal Plus, Daniel Eatock (director) wanted the visuals to move exactly to the sound so we came up with a system where I supplied each ident as four ‘stems’ (layers) of sound and the animations were made to react precisely to the music.

Does collaborating enhance your creativity?

I enjoy working with people who have come to me specifically for what I do best. They trust in the quality of what I do, will tell me when they love it and ask nicely to try again when they don’t think it’s working…
Conversely I do also enjoy working alone, which is probably why I often talk to myself – eg The Adventures of Graham Penwan

Who would you want to collaborate with?

I would love take a series of rhythms from ancient drum machines and ask Herbie Hancock to improvise solo piano over them. It would be my desert island disk. I can listen to old drum patterns for hours, and Herbie is my favourite jazz pianist.

What is your musical ambition?

I would like to write the next Popcorn. Listen

If your personality could be described as a sound what would it be?

It would be the sound of a cat’s paws gently walking along a kitchen shelf at midnight, slipping on a loose marble, letting out a surprised meoww before crashing onto the table below and sending small china ornaments flying in all directions.